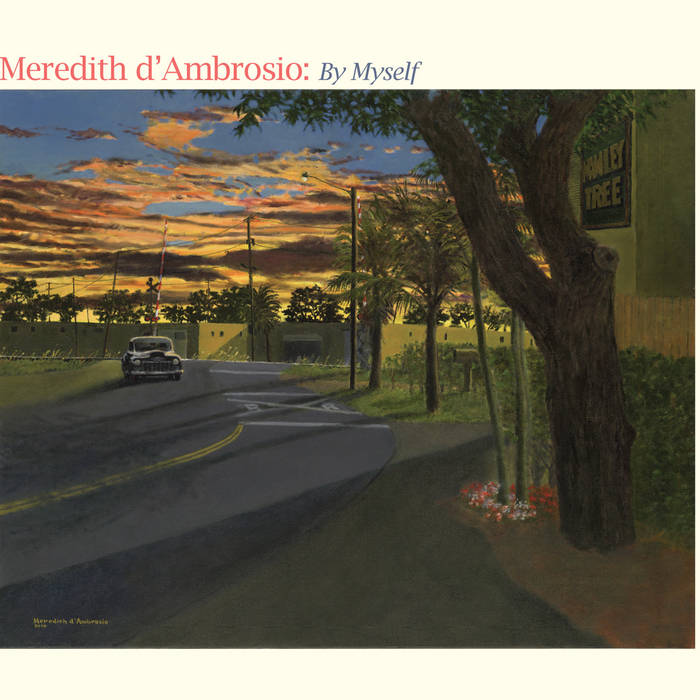 Arthur Schwartz and his lyricists made these 14 songs as stage and screen entertainment. Yet Meredith d’Ambrosio illumines them with beauty and emotional intensity as profound as any collection of Schubert lieder or Granados canciónes. Among d’Ambrosio’s 17 albums, this is the first devoted to the work of a single composer. Schwartz and his songs are products of the uniquely American alchemy that shaped jazz from a mishmash of ingredients and then melded its spirit with elements of Viennese operetta and the British music hall to create Broadway and motion picture musicals.

In American Popular Song, Alec Wilder observed of Schwartz, “He wrote with total self-assurance and high professional skill and never lingered by the wayside to gaze with longing at the musically greener grass of Culture.” Whether d’Ambrosio’s reading of his songs would please Schwartz is unknowable; he died in 1984, but Jonathan Schwartz, a noted performer of his father’s work and author of a book about him, told me how he feels about Meredith’s approach.

“To have Meredith record a whole album of my father’s songs is quite a treat and, to me, a gift. It’s a very sophisticated collection of obscure and well-known work. Song for song, it may be the best collection, the most interesting collection, of Arthur Schwartz songs ever released in this country. Her ‘High and Low’ is the best ‘High and Low’ I know, because it’s done softly and quietly rather than the cheery way the Astaires did it or the way I swung it in a Sinatra tempo.”

Through her interpretive artistry, Meredith uses the songs to tell a story that will touch any listener who has had been in love, yearned for love or lost love. She described the choice, preparation and performance of the album as “like magic, a spiritual thing.” Her husband, the pianist Eddie Higgins, died in 2009. Meredith and his friends called him by his given name, Haydn. When she recorded, he was a presence.

“I started with ‘By Myself,’” she said, “because after Haydn was gone, that’s exactly what happened to me. And I closed with ‘Haunted Heart’ because he loved that song. He played it often. It’s what he chose to call one of his albums. That song made me cry.”

The manipulation of vowels—known in the vocal trade as melisma—is not a regular d’Ambrosio practice, but when she subtly employs it in the word “beyond” at the beginning of the final bridge section of “Then I’ll Be Tired of You,” it makes Yip Harburg’s lyric all the more beguiling. It is an example of a technique so subtle that it does not advertise itself as technique. Following the verse of “You and the Night and the Music,” listen for the swing she gives the title phrase going into the chorus. Those are just two instances of her gentle wizardry with time, phrasing and interpretation.

Two of these songs may be less familiar to you than the Schwartz standards that occupy most of the album. “Once Upon a Long Ago” is from the 1956 television production High Tor, which starred Bing Crosby and Julie Andrews. Schwartz and Leo Robin wrote “Through a Thousand Dreams” for The Time, the Place and the Girl, a 1946 motion picture with Dennis Morgan, Jack Carson and Janis Paige. Meredith said that several people recommended it to her, including Jonathan Schwartz. “No one ever picked up on it,” Schwartz told me. “From childhood, I’ve always known that it was a classic. I’m spreading it around.”

Meredith added, “Like so many Arthur Schwartz songs, it’s not about being with someone, but that you could be with someone. Same with the Johnny Mercer lyric to ‘All Through the Night;’ it’s imaginary—in the dreams.”

After she chose the songs, Meredith set about adapting them not only to her voice, but also to her piano accompaniment. She reharmonized chords to accommodate her interpretations. She claims to “have no chops,” comparing her piano technique with that of her mother, who played and sang professionally in Boston and inspired Meredith to become a pianist. Her mother sent the girl first to Miss Julia Lubit’s School of Pianoforté, then to a succession of classical piano teachers and to Schillinger House, later named the Berklee School of Music. Bassist Gene Perla initiated Meredith into the mysterious depths of Bill Evans’s approach to harmonies. “My mother really played the piano, and she started off classically. She was terrific,” Meredith said. “I was envious. I grew up with a complex. I’m just about chords.” Anyone paying close attention to the two delicious arpeggios at the end of “Something to Remember You By” is likely to conclude that she’s also about touch and taste.

Of Meredith’s Sunnyside CDs, this is the first complete album since Another Time (1981) in which she is the only musician. Credit goes to Sunnyside’s François Zalacain for getting her to finally overcome reservations about her piano playing—and to her legion of fans in France for keeping the pressure on Sunnyside.

The album’s cover is by Meredith. She is as well known in art circles for her painting as she is among music lovers for her singing, playing and songwriting. Her painting inside the booklet is of Gypsy Moon, the black and tan coonhound that she and Haydn ordered from a breeder. She was to be Haydn’s dog. He did not live to see her. “Gypsy is so smart and funny. I love her so much,” Meredith said. “‘If There is Someone Lovelier Than You’ is dedicated to her.”

Two years following Haydn’s death, Meredith and Gypsy left Florida and have a new life in a 330-year-old Massachusetts farmhouse. In the house, in the studio and on walks in the woods, they are constant companions.

Bandcamp Daily  your guide to the world of Bandcamp